When using fspecial my figure/picture just ends up as a blue square?

Kristin Aldridge on 6 Nov 2021
⋮
Commented: DGM on 8 Nov 2021
Accepted Answer: Image Analyst
I have a picture (.tif) that I'm trying to filter to see the nuclei in since it is very faint and in black and white. However, when I use the code below I am just getting a blue figure and I'm not sure if I'm using the code correctly. I also want to use the sobel filter, which I have just been putting in place of the 'average' text but it gives the same thing. Any help is appreciated. Is it supposed to be put in a for loop?
uiopen(location of picture)
pic=drosophila_embryo_wild_type;
I=rgb2gray(pic);
imshow(I)
The code I was given to use is this:
hy = fspecial('average'); %average is the "type" of fspecial
hx = hy';
Iy = imfilter(double(pic), hy, 'replicate');
Ix = imfilter(double(pic), hx, 'replicate');
img = sqrt(Ix.^2 + Iy.^2);
figure, imshow(img,[]), title(Filtered')
img = img./max(max(img));
imshow(I)

⋮
You forgot to attach your image. Also, I doubt you need Sobel filter. I'd say 90% of the time people use edge detection, they really don't need to. We'll know once you show us your image after reading this:
TUTORIAL: How to ask a question (on Answers) and get a fast answer
Anyway, in the code above you're just going through a bunch of lines to blur the image, which can be done in a single line of code with a call to imfilter()
blurredImage = imfilter(img, ones(3)/9);

⋮
I had originally remarked on the redundant filtering steps, but it makes sense if it's an edge filter instead of an average filter. I'm assuming the use of 'average' here was just an artifact of debugging attempts.

Image Analyst on 7 Nov 2021
⋮
Edited: Image Analyst on 7 Nov 2021
@Kristin Aldridge you say "I have just been putting in place of the 'average' text but it gives the same thing." Note that in the last line of your code you are displaying the badly-named "I" instead of the processed image "img". img was displayed but you immediately blasted over it by displaying I.
imshow(img,[]), title(Filtered') % Show img, briefly
img = img./max(max(img));
imshow(I) % Replace img with I so now only I is showing
So of course your two displayed images look the same -- they are the same!

⋮
uiopen('/Users/(spot on desktop)_drosophila_embryo_wild_type.tif');
pic=drosophila_embryo_wild_type;
graypic=rgb2gray(pic);
imshow(graypic)
hy = fspecial('sobel');
hx = hy';
Iy = imfilter(double(graypic), hy, 'replicate');
Ix = imfilter(double(graypic), hx, 'replicate');
img = sqrt(Ix.^2 + Iy.^2);
figure, imshow(img,[]), title('Filtered')
img = img./max(max(img));
The image is in .tif form and mathworks is having issues opening it so I changed it to jpeg.
The 'sobel' filter I am required to use, and this is the code I was given to change the filters on the image with so I can't alter the code too much.
The error I am getting is in the imfilter.
>> Iy = imfilter(double(pic), hy, 'replicate');
Unrecognized function or variable 'getSeparableFilterThreshold'.
Error in imfilter>isSeparable (line 233)
sep_threshold = getSeparableFilterThreshold(class(a));
Error in imfilter (line 149)
if (isSeparable(a, h)&& (numel(size(a))<=3))
I also changed my "I" to "graypic"
So this is updated from my original issue and am now running into the error above. 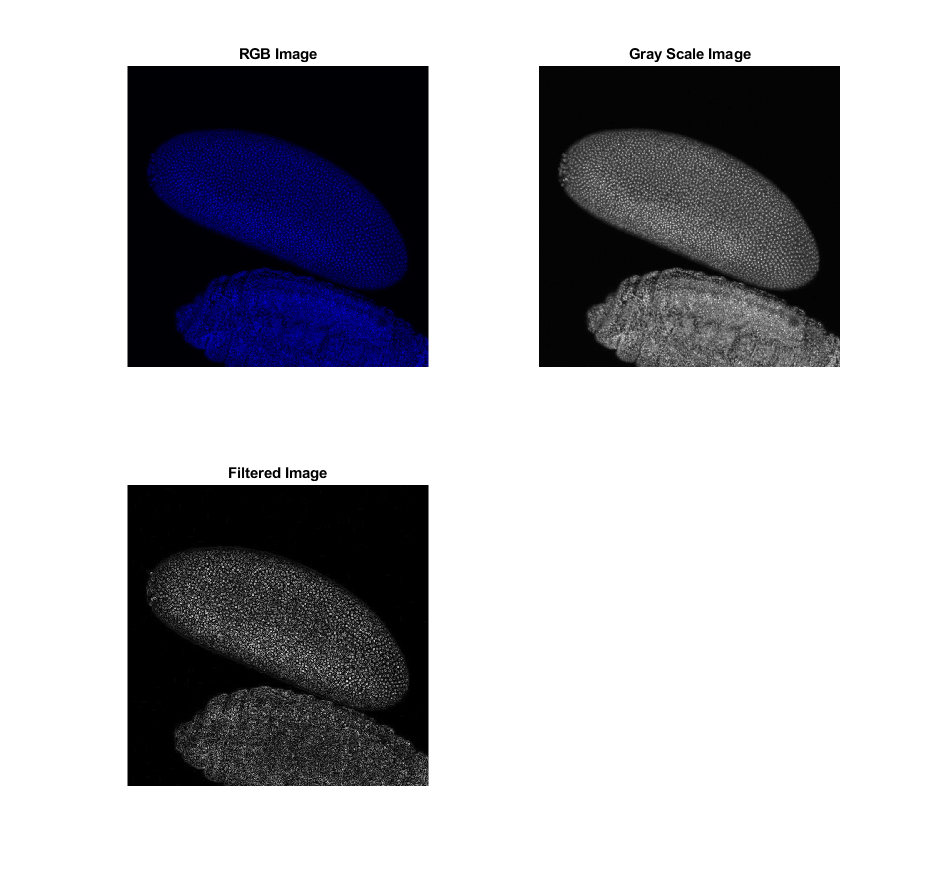 ⋮
So I ran your code and I'm still getting hung up on
Iy = imfilter(double(graypic), hy, 'replicate');
Gives me the error:
Unrecognized function or variable 'getSeparableFilterThreshold'.
Error in imfilter>isSeparable (line 233)
sep_threshold = getSeparableFilterThreshold(class(a));
Error in imfilter (line 149)
if (isSeparable(a, h)&& (numel(size(a))<=3))
This has to be something in my Matlab then, I don't know what else the issue could be.

⋮
What does this say
which -all imfilter
which -all getSeparableFilterThreshold

⋮
I'm sorry, I'm not sure what you mean?

⋮
After your program throws the error, type that into the command window and tell me what it says.

⋮
So I was operating under Matlab2021a and I installed Matlab2021b and it works now.
How frustrating. Thank you for your patience, I would have thrown my computer out the window without your help.

⋮
Well nevermind. It worked one time and when I went to do it again it is giving me that error again.
Ugh, I figured out the issue. I had the imfilter.m function in the same folder as my code.m and it was messing it up somehow. I thought it might be something with the path after starting from a new path worked but once I set it to that folder it stopped working.
Matlab man.

⋮
You should never move toolbox functions. Period. Do not move files such as imfilter.m to your code's folder. That said, it should have worked since it's the same imfilter(), but in general it's a very bad idea to move or modify toolbox functions.
And you should also not create your own functions or variables that have the same name as built-in functions. You can check by calling the which command.
The thing I'm confused about is you said "I had the imfilter.m function in the same folder as my code" yet when you did which imfilter you got this:
built-in (/Applications/MATLAB_R2021a.app/toolbox/matlab/ops/all)
which meant that the imfilter function WAS NOT in the same folder as your code, unless you put your code actually inside the toolbox folder (also a very bad idea).
And if you had your own imfilter in your own folder, then which would have shown two imfilters:
>> which -all imfilter
built-in (/Applications/MATLAB_R2021a.app/toolbox/matlab/ops/all)
c:\users\kristin\her code\some project\imfilter.m

⋮
OP ran the which command without the -, so it returned the location of all()

DGM on 6 Nov 2021
⋮
Edited: DGM on 6 Nov 2021
Ran in:
You're probably starting out with a uint8-scaled image and casting it as double. At that point, you can do whatever you want with the data, but you can't expect all the tools to know what to do with it. Several tools (including imshow) expect floating point images to be scaled [0 1]. Using the implicit normalization syntax like imshow(A,[]) doesn't work if the image is RGB.
The solution is simple. Use im2double() instead of double() unless you want to make sure that you take care to handle all the issues that might otherwise arise from using an improperly-scaled image.
pic = im2double(imread('peppers.png')); % use im2double once
I = rgb2gray(pic); % this isn't used
hy = fspecial('sobel');
hx = hy';
Iy = imfilter(pic, hy, 'replicate');
Ix = imfilter(pic, hx, 'replicate');
img = mat2gray(sqrt(Ix.^2 + Iy.^2));
imshow(img), title('Filtered') 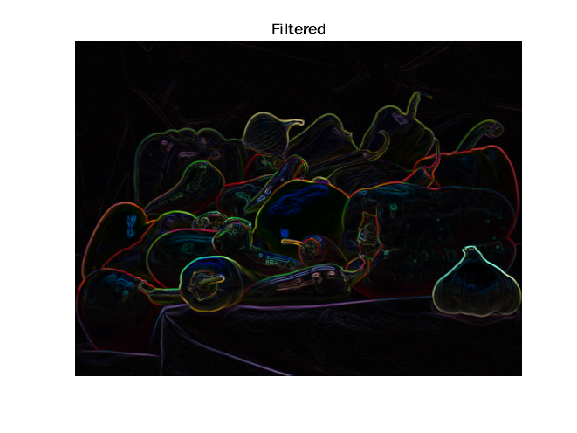 ⋮
Hello,
I tried using your method above but I'm getting the error below for the like Iy = imfilter(pic2, hy, 'replicate');
Unrecognized function or variable 'getSeparableFilterThreshold'.
Error in imfilter>isSeparable (line 233)
sep_threshold = getSeparableFilterThreshold(class(a));
Error in imfilter (line 149)
if (isSeparable(a, h)&& (numel(size(a))<=3))

⋮
If imfilter() was working before, then I don't know what changed. getSeparableFilterThreshold() is a private function in IPT. If it's always been missing, then there's something wrong with your installation. If it just recently went missing, you'll have to find out why. It's supposed to be in $MLROOT/toolbox/images/images/private/

⋮
imfilter has not worked for me before. I have the Image Processing Toolbox installed as well, so I'm not sure where it is going wrong I just wanted to make sure it wasn't in my code before I start uninstalling and reinstalling everything.

⋮
No need to do that. Did you see my Answer below?
Also, attach your picture and current version of your code.