How to dramatically speed-up the function plot

Riccardo Scorretti on 5 Jun 2020
⋮
Edited: Riccardo Scorretti on 5 Jun 2020
Accepted Answer: Steven Lord
Introduction
Recently I found that in some circumstances the function plot is extremely slow, and I needed to find a solution to this problem. This post contains a description of this problem, and a possible solution which I found.
More specifically, consider the following code:
N = 1E6;
x = rand(N,1) ; y = rand(N,1);
figure
subplot(1, 3, 1);
tic ; hndl = plot(x, y, 'k--') ; axis square ; toc
numel(hndl)
subplot(1, 3, 2);
x_ = [ x(1:end-1) x(2:end) ]';
y_ = [ y(1:end-1) y(2:end) ]';
tic ; hndl = plot(x_, y_, 'k--') ; axis square ; toc
numel(hndl)
This program plots exactly the same image, with exactly the same number of lines, but the computational time are astonishingly different! On my PC I got the following result:
Elapsed time is 0.003680 seconds.
ans =
1
Elapsed time is 313.721635 seconds.
ans =
999999
Possible explaination for this issue
This issue is by no way related with a problem with OpenGL, or the graphic card driver, or the operative system. The point is that plotting a single polygon composed of N line by using the function plot is extremely faster than plotting the same N lines independently. In fact, I believe that the problem is due to the fact that when multiple lines have to be plotted, Matlab must creates as many instances of graphical objects (in this case matlab.graphics.chart.primitive.Line). Of course, this is my personal opinion.
By the way, replacing the function plot by the function line, or increasing Java memory both doesn't improve the performances.
Solution
A possible way to mitigate this problem is to use the function patch instead of plot. In most cases, this will produce nearly identical outputs. For instance, we can complete the previous program with:
subplot(1, 3, 3);
x_ = [ x(1:end-1) x(2:end) ]';
y_ = [ y(1:end-1) y(2:end) ]';
tic ; hndl = patch(x_, y_, 'k') ; axis square ; box on ; toc
numel(hndl)
One observes that in this case a single handle of class matlab.graphics.primitive.Patch is instanciated. The computational time is still much higher than in the trivial case (plotting of a polygon, elaped time = 0.003680 seconds), but becomes acceptable:
Elapsed time is 0.688164 seconds.
ans =
1
Hereafter it is depicted the output of the program in the case N = 20. One observes that the three graphics are practically identical: 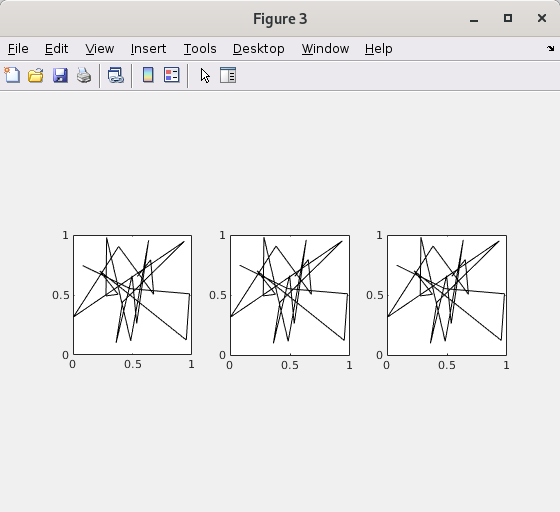 This workaround is acceptable when continuous lines have to be plotted. As long as it is required to have more styled lines, it is possible to play with the argument provided to the function patch, but the result will not be exactly the same. For instance, in order to obtain dashed lines one can se the property LineStyle:
hndl = patch(x_, y_, 'k', 'LineStyle', '--')
The output is not identical to the one obtained with plot, but it may be acceptable, depending on your requirements: 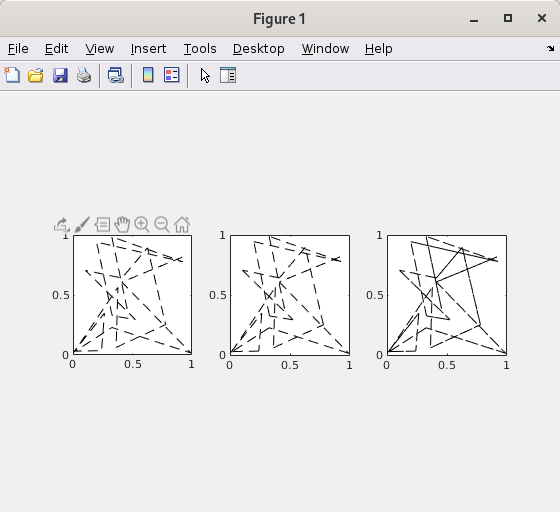 Conclusion
In some circumstances the function plot has very poor performances. This issue seems to be related to the number of instances of graphical handles which are created. A possible workaround, which produces identical or very similar outputs, is to replace the function plot with patch.
R. Scorretti

⋮
I'm afraid that the solution you propose works in the particular case of my example because the graphic is a single polygonal line, but unfortunately it doesn't work in a more general case.
In fact, I'm working with a Finite Element program, and I need to plot a large number of disconnected lines (= which don't form a single polygonal line). Here is what I get when I simply remove the transpose in a real case: 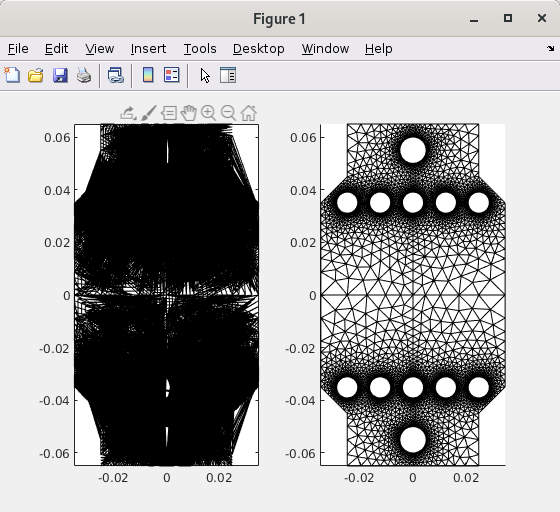 Of course the expected output is on the right, and it has been obtained by replacing plot by patch.

⋮
Yes, this can happen, because the two methods in your question are not identical, so the comparison might not be useful. I guess the simple workaround is to use patch(), a more complicated (but maybe more accurate) solution might be to rearrange the vertices such that a single connected line can trace this shape (not sure if it is feasible).