With constant coefficients and special forcing terms (powers of t, cosines/sines, exponentials), a particular solution has this same form.

OK. So this is about the world's fastest way to solve differential equations. And you'll like that method. First we have to see what equations will we be able to solve. Well, linear, constant coefficients. I made all the coefficients 1, but no problem to change those to A, B, C. So the nice left-hand side.

And on the right-hand side, we also need something nice. We want a nice function. And I'll tell you which are the nice functions. So I can say right away that e to the exponentials are nice functions, of course. They're are always at the center of this course.

And the point is, we know what to look for. We just have some coefficient to find. And we'll find that by substituting in the equation. Now, do you remember what we look for when the right-hand side is e to the st? Then look for y equals some constant times e to the st, right?

When f of t-- maybe I'll put the equal sign down there. If f of t is e to the st, then I just look for a multiple of it. That's one coefficient to be determined by substitute this into the equation. Do you remember the results? So this is our best example.

When I put this in the equation, I'll get the derivative brings an s. Second derivative brings another s. So I get s squared and an s and a 1 times y e to the st is equal to e to the st. We've done that before. Here we see it as a case with undetermined coefficient y. But by plugging it in, I've discovered that y is 1 over that.

What about t? What about t? A polynomial. Well, that only has one term. So what would be a particular solution to that equation? So I really have to say, what is the-- try y particular equals-- now, if I see a t there, then I'm going to look for a t in y. And I'll also look for a constant. So a plus bt would be the correct form to look for.

Let me just show you how that works. So this now has two undetermined coefficients. And we determine them by putting that into the equation and making it right. So try yp is a plus bt in this equation. OK, the second derivative of a plus bt is 0. The first derivative of that is b. So I get a b from that. And y itself is a plus bt. And that's supposed to give t.

And if I put that into the equation, it will be correct. So I have found a particular solution, and that's my goal, because I know how to find null solutions. And then together, that's the complete solution. So we've learned what to try with polynomials. With a power of t, we want to include that power and all lower powers, all the way down through the constants. OK.

With exponentials, we just have to include the exponential. What next? How about sine t or cosine t? Say sine t. So that case works. Now we want to try y double prime plus y prime plus y equals, say, sine t. OK. What form do we assume for that?

Well, I can tell you quickly. We assume a sine t in it. And we also need to assume a cosine t. The rule is that the things we try-- so I'll try y. y particular is what we're always finding. Some c1 cos t, and some c2 sine of t. That will do it.

In fact, if I plug that in, and I match the two sides, I determine c1 and c2, I'm golden. Let me just comment on that, rather than doing out every step. Again, the steps are just substitute that in and make the equation correct by choosing a good c1 and c2.

So what I try is at plus-- or rather, a plus bt. I try a product. Times cos t and c plus dt times sine t. That's about as bad a case as we're going to see. But it's still quite pleasant. So what do I see there?

Because of the t here, I needed to assume polynomials up to that same degree 1. So a plus bt. Had to do that, just the way I did up there when there was a t. But now it multiplies sine t. So I have to allow sine t and also cosine t.

Let me do y double prime minus y, say, is e to the t. What is special about that? What's special is that this right-hand side, this f function, solves this equation. If I try e to the t, it will fail. Try y equals some Y e to the t. Do you see how that's going to fail?

If I put that into the equation, the second derivative will cancel the y and I'll have 0 on the left side. Failure, because that's the case called resonance. This is a case of resonance, when the form of the right-hand side is a null solution at the same time. It can't be a particular solution. It won't work because it's also a null solution.

When there's resonance, take the form you would normally assume and multiply by that extra factor t. Then, when I substitute that into the differential equation, I'll find Y's quite safely. I'll find Y entirely safely. So I do that. So that's the resonant case, the sort of special situation when e to the t solved this.

So we need something new. And the way we get the right new thing is to have a t in there. So when I plug that in, I take the second derivative of that, subtract off that itself, match e to the t. And that will tell me the number Y.

Perhaps it's 1/2 or 1. I won't do it. Maybe I'll leave that as an exercise. Put that into the equation and determine the number capital Y. OK. Let me pull it together. So we have certain nice functions, which we're going to see again, because they're nice. Every method works well for these functions.

So this is the best equations to solve to find particular solutions. Just by knowing the right form and finding the constants, it did come out of the particular equation. OK. All good, thanks. 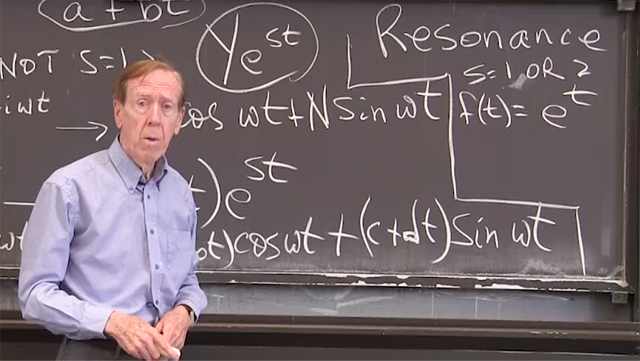 15:48
2.6b: An Example of Method of Undetermined Coefficients
View full series (55 Videos)