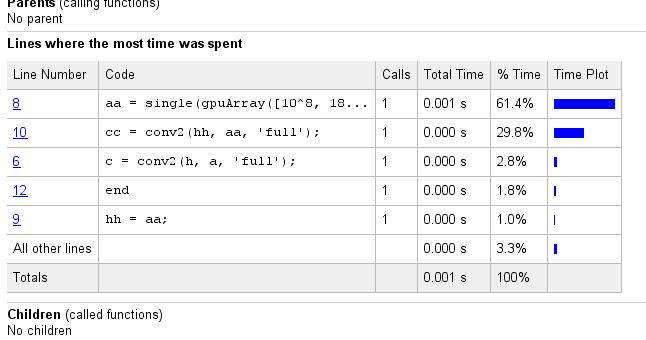 So I ran the official gpuBench()
http://www.mathworks.com/matlabcentral/fileexchange/34080-gpubench
The result is astonishing! Running on the GPU IS slower, much much more slower.
The first picture shows the result from GPU, and the second, CPU.

I will be very grateful if anyone could tell me why. Many thanks

⋮
A follow-up question. After gpuBench finished running, no HTML report was given.
Anything with browser setting, etc.?

⋮
Well, Joss Knight gave the trick of using arrayfun in responding to another question of mine concerning it
https://www.mathworks.com/matlabcentral/answers/464361-why-is-arrayfun-for-gpu-slower-than-normal-operations?s_tid=prof_contriblnk
About the profile vs tic/toc issue. I agree with you that if proflle suffers the disadvantage. So why bother using it? Yet for any large chunk of code at work, can one be expect to add gputimeit and timetie on each and every piece of code?
I ran the code above again, it gives

this time, sounds reasonable. :-)
Anyway, do you mind elabourating on what a lazy evaluation refers to, please?

⋮
Lazy Evaluation means that instead of computing something immediately, the system keeps track of how you would compute it if you ever turn out to need it. Then, it only computes the item when you ask for the result.
For example, suppose I have a computation such as
result = sum(diag(A*B))
for matrices A and B. The normal non-lazy way of computing this would be to calculate all of the A*B entries and then to take the result. However, you do not need to compute all of the entries to get the final result: you can do
for i = 1 : size(result,2)
result(1,i) = dot(A(i,:), B(:,i).');
end
The lazy way of computing this would not bother to compute C(i,j) = dot(A(i,:), B(:,j).') until C(i,j) is needed for something else, and since only C(i,i) end up being needed for the diag(), you get away with notably less computation.
Lazy computation for GPU takes a record of the instructions you give, but does not do the computation until the point where the result is needed, such as when you gather() the result back to the CPU.

⋮
I see. So generally speaking, as I optimise actual code for work, which approach shall I adopt?
tic toc, profile, or gputimeit()?

⋮
profile is probably best suited for determining how many times a line was invoked, and for determining which general sections of code are the most time consuming.
However, the actual amount of computation required might be substantially less if only the Just In Time compiler had not been turned off by profiling -- and that in turn means that in some cases the most expensive section of code is not what it appears at first. Once you have identified a general section of code as being expensive then unless it makes obvious sense that one particular line will certainly be the most expensive part, it might be better to rewrite the section into smaller functions to narrow down costs and so restrict your optimization efforts to functions that are disproportinately expensive.
To narrow down which of several different implementations is most efficient for a purpose, create test functions for each variety and time them with timeit(). Repeat the timeit() a number of times as the timings can vary a fair bit. Be careful on interpreting the results: if you have two different routines you are calling timeit() on and the first one seems to be more expensive, then sometimes the real issue is something to do with JIT. This leads me to doing tests such as
N = 50;
timesA1 = zeros(1,N); timesA2 = zeros(1,N); timesB1 = zeros(1,N);
FA = @FirstVariation; FB = @SecondVariation
for K = 1 : N; timesA1(K) = timeit(FA, 0); end
for K = 1 : N; timesB1(K) = timeit(FB, 0); end
for K = 1 : N; timesA2(K) = timeit(FA, 0); end
It is common for timesA1 to trend much higher than timesB1 and then for timesA2 to show times much closer to timesB1 -- that is, re-testing exactly the same thing can sometimes end up much faster for reasons that are not at all clear.
For timing tests on variations involving GPU use, always use gputimeit()

⋮
The screenshot posted by te OP seems to show, that his GPU works slightly faster on double than on single. Strange.

⋮
Edited: Theron FARRELL on 27 May 2019
Yes, the performance of K620M is 863.2 GFLOPS for single, and 26.98 GFLOPS for double.
Would it be because I am using the laptop version of GPU? As suggested in an answer to another post, GPU in laptops are severely limited.
https://www.mathworks.com/matlabcentral/answers/383903-how-to-run-train-a-convolutional-neural-network-for-regression-example-in-single-precision-on-lapt?s_tid=answers_rc1-2_p2_MLT
I re-ran gpuBench(), the web report was generated this time 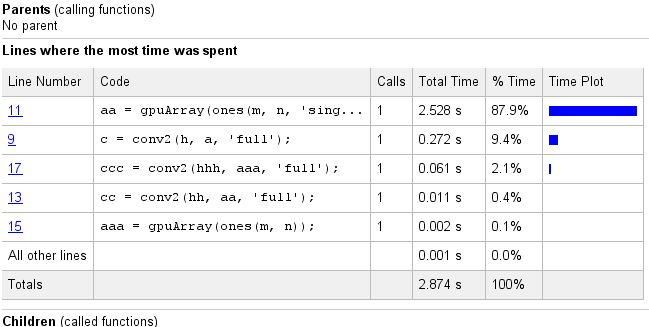 The fact that CPU ran the fastest corroborated the aforementioned observation, even if I used arrayfun(). But why? How should I modify the code?
What would be your ideas and suggestions, then? Cheers
BTW, I have dedicated GPU to working for MATLAB in NVIDIA's control panel, and removed all other applications.

⋮
Edited: Walter Roberson on 29 May 2019
Hi Theron,
I ran your code on my workstation, on which I have an NVIDIA K40c and an Intel Xeon E-1650 CPU. I wasn't able to reproduce your results, which seems to suggests that the your GPU might be the "limiting factor".
What version of MATLAB are you using?

⋮
@Andrea: This is not my code.
@Theron FARRELL: Using the profiler disables the JIT acceleration. The comparison of timings, which are displayed as "0.000s" is very fragile. You cannot expect to get a realistic view on the efficiency of the code with such comparisons.
"And now, it seems that 'single' is the fastest. So strange...." - I still think, that this is the expected effect. If you observe anything else, there is eitehr a problem in the code, or the transfer of the data to the GPU exceeds the time of the actual processing, or the total times are too short to be measured relaibaly by the profiler. Using some hundred calls in a loop and tic/toc is more accurate, but timeit is even better.

⋮
Hi Andrea,
Thanks for your help. What I am concenred about is not the time occupied by allocation, but the line #20 ran faster than line #22, that is, code runing on CPU ran faster than on GPU even when I used arrayfun. However, I think tic/toc might be mire accurate, which I will try.
BTW, how will I be able to disable JIT acceleration in the profile? Cheers.

⋮
Edited: Walter Roberson on 29 May 2019
@Jan: Sorry, I meant to say "Theron". I changed my previous comment to fix that.

⋮
@Theron: I do not undestand, why you expect arrayfun to have a positive effect on the processing speed. The opposite is expected.
Starting the profiler disables the JIT accleration automatically, because the JIT can re-oreder the commands if it improves the speed, but then there is no relation between the timings and te code lines anymore. This means, that running the profiler can affect the run time massively, especially for loops. Of course this sounds to be counter-productive for the job of a profiler - and it is so, in fact. Therefore the profiler and tic/toc should be used both, because they have different advantages and disadvantages. For measuring the speed of single commands or elementary loops, the profiler is not a good choice.