The classic Lotka-Volterra model of predator-prey competition, which describes interactions between foxes and rabbits, or big fish and little fish, is the foundation of mathematical ecology. It has also been applied to many other fields, including economics. The model is a nonlinear system of two equations, where one species grows exponentially and the other decays exponentially in the absence of the other. The one nonzero critical point is stable. All solutions are periodic. The program "predprey" provides an app for studying the model.

The Lotka-Volterra predator prey equations are the granddaddy of all models involvement competition between species. They are the foundation of fields like mathematical ecology. Think of the two species as rabbits and foxes or moose and wolves or little fish in big fish.

Y1 represents the prey, who would live peacefully by themselves if there were no predators. I've chosen the units of time and population so that the coefficients in front of the leading linear terms are one. So y1 prime equals y1 represents exponential growth of the prey in the absence of any predators.

But then here are the non-linear terms. These are like logistics terms, except with the interaction between the two species. The growth of Y1 is limited by the presence of y2. So y1 will grow until this term becomes 0 one y2 read reaches mu2.

On the other hand, the decay of y2 becomes 0 when y1 reaches mu1. To complete this specification, we need the initial conditions. So we have two values eta 1 and eta 2, which are the initial values of y1 and y2.

So these four parameters, two mus and two etas, are the four parameters we have in our predator prey model. Don't worry about the fact that these are continuous variables and that we can have non-integer numbers of individuals.

We can have half of a rabbit or a tenth of a moose. These are, after all, models that are idealized versions of what's happening in nature. The critical points are when the derivatives become 0. There's a critical point at the origin.

The eigenvalues of the Jacobian are plus or minus I. And so this critical point is a stable center with a period 2pi. So these are non-linear equations. We can't express the solution in terms of simple analytic functions.

We have to compute them numerically. But we do know this about their behavior. If the initial conditions are close to the critical point, the solution is periodic. The period is close to 2pi. And the orbit is close to an ellipse.

On the other hand, if the initial conditions are far from the critical point, then it turns out the solution is still periodic. But the period is greater than 2pi and the orbit is far from an ellipse. OK, let's bring up MATLAB and compute a solution.

We need the parameters. Here's a mu and an eta. And I'll set the differential equation. And then choose ODE 45 and we'll integrate from 0 to 25. And here's the solution. It's periodic. A predator and a prey. And it looks like the period, it's returning back to the initial condition is 100 and 400.

And it's returning back to that along about here. And we've integrated over something more than three periods. I happen to know that the period is 6.5. And so I can-- I'm going to set-- I want to compute to higher accuracy. 10 to the minus 6.

And let's capture the solution and integrate over three periods. It generated 337 points. Let's plot it with the finer dots. And we can see here, we've gone over three periods and return back to our initial values of 100 and 300.

And now I'm going to use something that'll show off the periodicity of function in MATLAB called Comet. One orbit. Two orbits. Three orbits. Determining the period of a periodic solution is often the important part of a calculation.

In the MATLAB ODE suite, this is done with an event handler. So I'm going to use ODE's set to provide an event handler called Pit Stop. And here's the code in Pit Stop. This code is called every time step in the integration.

And I'm not going to go into detail here, but it computes a function g that we're looking to see when this is 0. And when g returns to 0, the integration is stopped. I'm going to-- I have a display function in here.

Ordinarily, this wouldn't be here. But I want to look at this to see how the calculation is done. It says, terminate when y returns to the point where its angle mu is the same as the angle between eta and mu. This is more reliable than just finding when the solution returns back to its initial condition.

So let's run ODE 45 and tell it to integrate over an infinite time step, over an infinite interval. That's not going to happen, because we're going to stop as soon as g is 0 but with the option vector set with this event handler. So here it is.

And here's the output produced by Pit Stop as we integrate along. Here's the values that it's found. And here's where g returns to 0. I've produced a t vector with 117 values in it. And the final value of t is this value that I said was the period of this solution.

So that's how the period was determined by this event handling feature in the ODE solvers. Great. I have a program called Predator Prey that's in the collection of programs that comes with NCM, Numerical Computing with MATLAB. My book that's available on the MathWorks website.

And initially, it's set at the conditions we've been talking about. Here's 400 rabbits and 100 foxes around the critical point of 300 rabbits and 200 foxes. And here's the period of 6.5 some odd that we've been working with.

This is 6.28, which is twice 3.14. But if I change it so that the two are far away from each other, then the phase plane plot becomes quite different from an ellipse. It's always periodic. That's an amazing thing about these nonlinear equations.

They always have a periodic solution. But now as you can see, the period is greater than 2pi. And the solutions are very far from sinusoids. So that's the pred prey app that's available with the programs in from the MathWorks website under NCM for Numerical Computing with MATLAB. 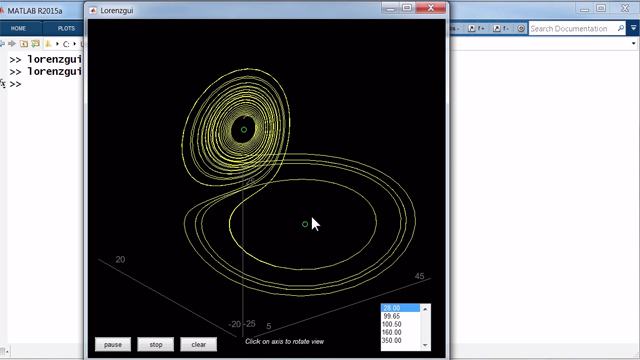