How do I separate data into columns from a text file?

Terez on 25 Jun 2014
⋮
Commented: Terez on 25 Jun 2014
Accepted Answer: A Jenkins
I'm trying to load data from a text file that had a heading, two column headers and 50 or so rows of data. Attached is a picture. I'm using the readtable function [readtable(filename)] but the problem is that when matlab puts the data in an array it combines the two columns of data and puts the numbers together separated by decimal points. How do I set the two headings as separate columns and put the data underneath these headings? First picture is the data and the second is the output from matlab. 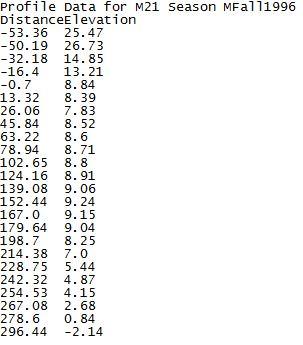 A Jenkins on 25 Jun 2014
⋮
Have you tried using the Import Wizard? You can adjust your delimiters and header rows until it looks right, and there is even an option to generate code for you. Then you can edit the code or save it later to get exactly what you want.
In your case, at least you will want to set the 'Delimiter' option to '\t'. (It is ',' by default.)

⋮
I was originally getting an error when I put a tab between distance and elevation but your code worked thank you!

dpb on 25 Jun 2014
⋮
Problem is there's no separation between the two column headers so readtable thinks there's to be only one variable. Either fix the input file to fix that problem (may also need to tell it to skip the preceding headerline as well, not sure how smart it is as my version doesn't include it). You can see this is a problem as the first row shows the variable name as 'DistanceElevation' instead of two variables.
It doesn't appear there's an option to skip the two headerlines and manually set a header line value for variable names--if you ignore them it just uses some default names so looks like your best bet is to either
a) fix the file format, or if that's not feaible
b) use one of the other input forms and set the variable names in the table manually after reading.