Olivier Carpentieri on 7 May 2019
⋮
Commented: Arnaud Delorme on 9 May 2019
Hello,
As another post about eeglab, I cannot start it.
I proceeded like the description on eeglab website, but when i launch it on matlab (R2019a), i've got these errors (screen shot).
The version of eeglab is the latest V 14.1.2
Someone can help me?
Thank's 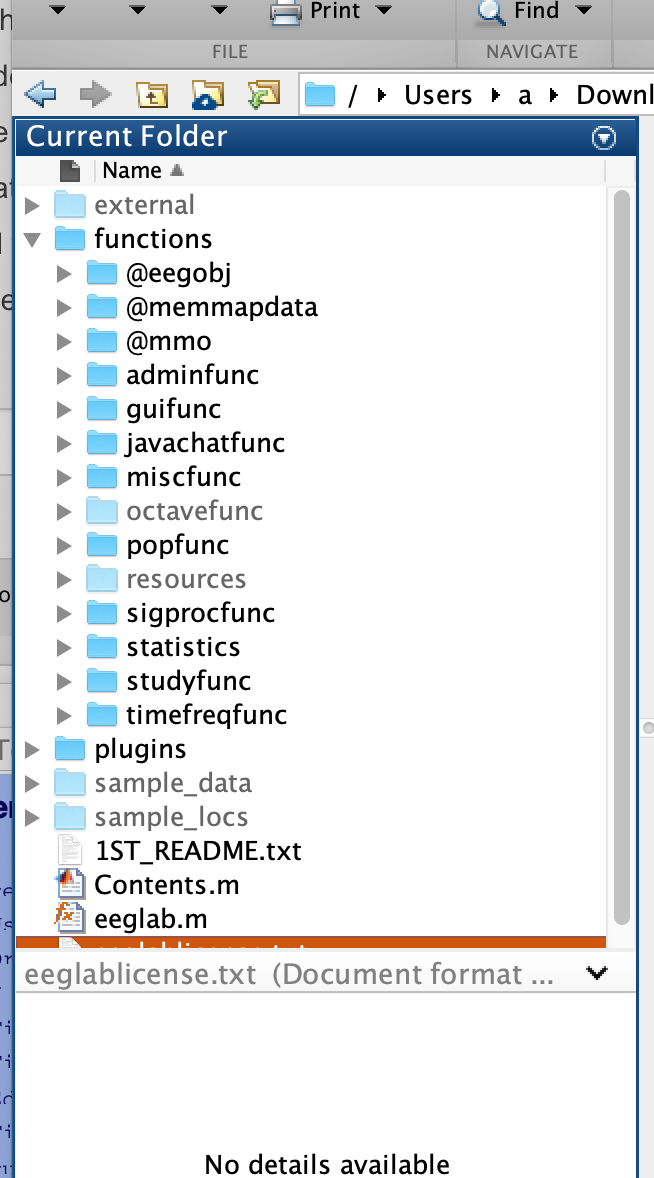 ⋮
I don't see any errors. I just see a warning that a path could not be added. Have you tried adding this path yourself?
https://www.mathworks.com/help/matlab/ref/addpath.html

⋮
I thought that was an error.
I'm not a geek! and I don't understand code.
This software is complexe and even if you send me the link for the tutorial, i'm lost!

Walter Roberson on 7 May 2019
⋮
https://www.mathworks.com/help/matlab/release-notes.html
Starting in R2019a, resources is a reserved directory name and cannot be added to the path.
The version of eeglab that I just checked does not put any .m or .p or .mdl or .slx in the resources directory there. It does, however, put some .mat files there.
It looks to me as if the main effect would be to mess up the default 3-D head mesh file and mesh associated channel file. The code in that section is somewhat odd, so I am not at all sure that I have understood it, but I think it is counting on being able to use load() of the .mat without having to have a path specified. If so then copying those .mat files to any other directory under eeglab should work.
My first thought was to rename "resources" to a slightly different name, and make the minor adjustments to the source code. However, my examination hints that the directory name resources is baked into the binary executable named ica_linux that is inside that directory. When that executable is available (and you are using Linux?) then it is used for the ICA phase, instead of running ICA in MATLAB. When possible, that would probably be faster and use less memory than ICA in MATLAB, so it might not be a good idea to disturb that. Other parts of the code such as icadefs and binica suggest that you should be able to place such an executable anywhere, but if the executable has the directory name built into it, then it is probably not portable to a different directory name.
Work-around:
copy the resources directory to Resources (capital R) and modify eeglab.m slighty to refer to 'Resources' in the myaddpath() call. That should shut up MATLAB without affecting any functionality. (Better yet, link the files in resources to be in Resources as well, so that you save space.)

⋮
Thank you for your help.
I had tried all you tell me.
Resources with "R" dosen't work.
I work on mac so i don't found ica_lilnux.
If i just change "resources" in "resource" or "rss" it's the sale issue.
I had past in another folder all files of resources and i had change the name in the link in "myaddpath"
Now messages changed and i need this:
dipfit and firflit
I added dipflit and firflit apps but i've got this message! 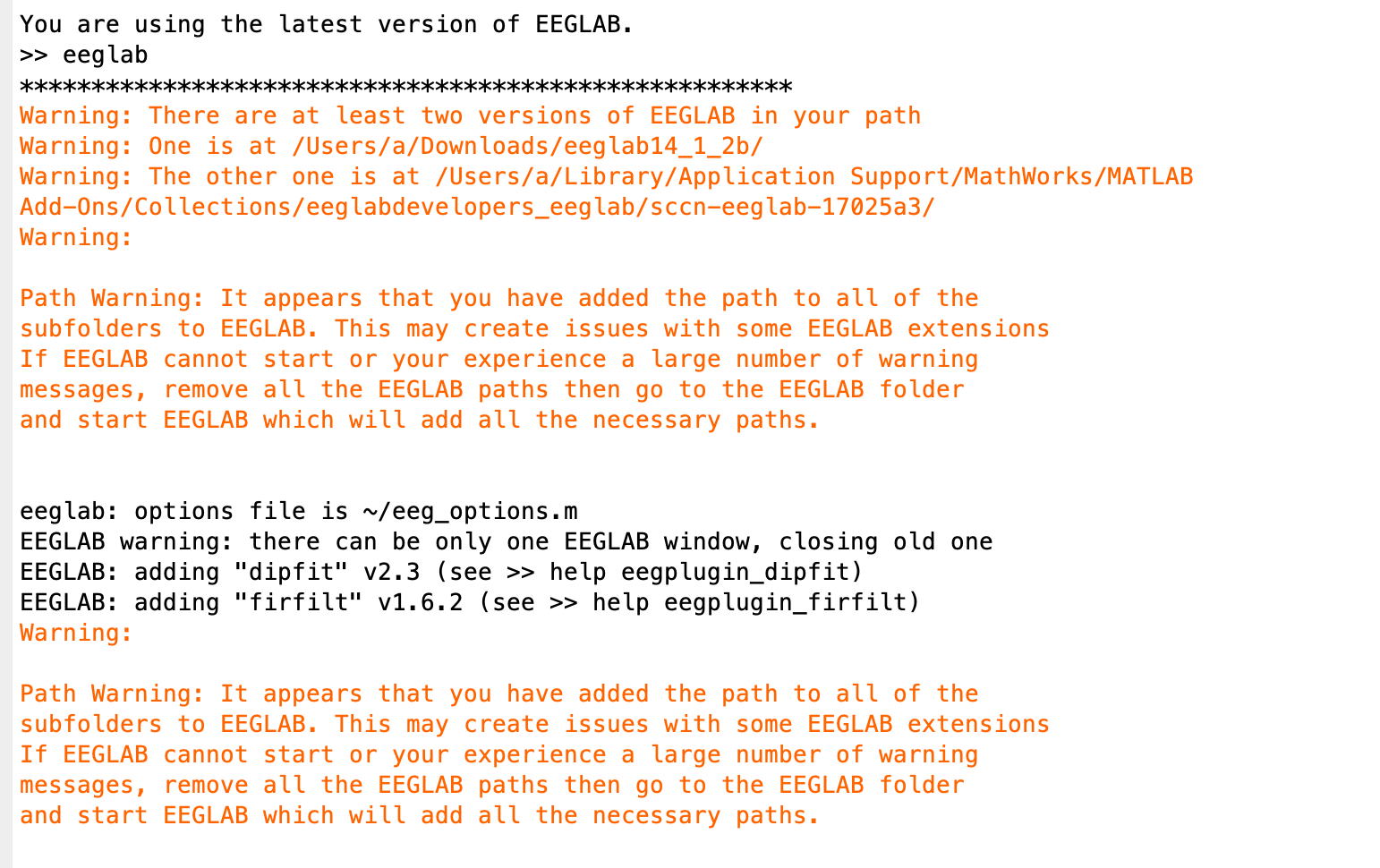 ⋮
I just checked, and on Mac with HFS+ file systems, even though the default is case in-sensitive, MATLAB is fine with having a directory named Resources on the path.
The things you show now are warnings. It looks like you installed eeglab 14.1.2b yourself, and that you also used the Add-On Explorer to install eeglab . You should try to resolve that so you do not run into conflicts along the way.

⋮
I had just seen a tutorial on youtube and at the step where i am, with the blue window, i can choose a file (image1)but i've got a error when i open it with test file.
"line 424"
I cannot choose .csv file (cf image2)
On Muse forum someone use .csv files to create graphs.
I need something more or am i just deeply lost in this too complicated software? ?

⋮
csv file would be "ASCII text file"
It would help to have a complete copy of the error message. It looks like I have 14.1.0b installed, so the line numbers will not exactly agree... and line 142 does not tell me which file to look in.

⋮
I thought the same thing about ASCII! thank's
This is the error message:

⋮
The code at that point requests to load() the file with the -ascii flag. That would fail under any of these circumstances:

Arnaud Delorme on 8 May 2019
⋮
Based on your screen capture, it seems that it did start.
Arno

⋮
The original message in orange warning about adding folders named "resources" is an actual problem that needed to be debugged and repaired. It was an incompatibility introduced in MATLAB R2019a. It did not keep the program from being launched, but it would have keep the program from functioning properly in some circumstances.

⋮
Thank you for your answer.
Do you know how can i debugg and repair this issue?

⋮
You can checkout the latest version on Github where the folder has been renamed to prevent the conflict with Matlab. https://github.com/sccn/eeglab

⋮
Thank you.
I'll change all the parts as it show when i finish my job. By browsing the code I saw that you are a programmer of this code. So thank you so much for this big work, but isn't it easer to change it directly to the source for other users?

⋮
Yes, the code has already been changed on Github. However, the code has not been released as a ZIP file for users who do not use Github.