Differential Equations and Linear Algebra, 1.2: The Calculus You Need

The sum rule, product rule, and chain rule produce new derivatives from the derivatives of xn, sin(x) and ex. The Fundamental Theorem of Calculus says that the integral inverts the derivative.

OK well, here we're at the beginning. And that I think it's worth thinking about what we know. Calculus. Differential equations is the big application of calculus, so it's kind of interesting to see what part of calculus, what information and what ideas from calculus, actually get used in differential equations. And I'm going to show you what I see, and it's not everything by any means, it's some basic ideas, but not all the details you learned. So I'm not saying forget all those, but just focus on what matters.

We'll have to do more with that. And then the inverse function related to the exponential is the logarithm. With that special derivative of 1/x. OK. But you know those. Secondly, out of those few specific facts, you can create the derivatives of an enormous array of functions using the key rules.

So it's a function of t then, time, It's the integral of this, e to the t minus s. Some function. That's a remarkable formula for the solution to a basic differential equation.

So with this, that solves the equation dy dt equals y plus q of t. So when I see that equation and we'll see it again and we'll derive this formula, but now I want to just use the fundamental theorem of calculus to check the formula. What as we created-- as we derive the formula-- well it won't be wrong because our derivation will be good. But also, it would be nice, I just think if you plug that in, to that differential equation it's solved.

OK so I want to take the derivative of that. That's my job. And that's why I do it here because it uses all the rules. OK to take that derivative, I notice the t is appearing there in the usual place, and it's also inside the integral. But this is a simple function.

We've integrated something, I want to take its derivative, so I get that something. I get e to the minus tq of t. That's the fundamental theorem. Are you good with that?

So let's just look and see what we have. First term was exactly y. Exactly what is above because when I took the derivative of the first guy, the f it didn't change it, so I still have y. What have I-- what do I have here? E to the t times e to the minus t is one.

So e to the t cancels e to the minus t and I'm left with q of t Just what I want. So the two terms from the product rule are the two terms in the differential equation. I just think as you saw the fundamental theorem was needed right there to find the derivative of what's in that box, is what's in those parentheses. I just like that the use of the fundamental theorem.

OK one more topic of calculus we need. And here we go. So it involves the tangent line to the graph. This tangent to the graph.

So it's a straight line and what we need is y of t plus delta t. That's taking any function, maybe you'd rather I just called the function f. A function at a point a little beyond t, is approximately the function at t plus the correction because it-- plus a delta f, right? A delta f.

And what's the delta f approximately? It's approximately delta t times the derivative at t. That-- there's a lot of symbols on that line, but it expresses the most basic fact of differential calculus. If I put that f of t on this side with a minus sign, then I have delta f. If I divide by that delta t, then the same rule is saying that this is approximately df dt.

That's a fundamental idea of calculus, that the derivative is quite close. At the point t-- the derivative at the point t is close to delta f divided by delta t. It changes over a short time interval. OK so that's the tangent line because it starts with that's the constant term. It's a function of delta t and that's the slope.

Just draw a picture. So I'm drawing a picture here. So let me draw a graph of-- oh there's the graph of e to the t. So it starts up with slope 1. Let me give it a little slope here.

That's the tangent line. That's this approximation to f. And you see as I-- here is t equals 0 let's say. And here's t equal delta t. And you see if I take a big step, my line is far from the curve.

And we want to get closer. So the way to get closer is we have to take into account the bending. The curve is bending. What derivative tells us about bending?

So it curves up. It doesn't follow it perfectly, but as well-- much better than the other. So this is the line. Here is the parabola. And here is the function. The real one.

OK. I won't review the theory there that it pulls out that one half, but you could check it. Now finally, what if we want to do even better? Well we need to take into account the third derivative and then the fourth derivative and so on, and if we get all those derivatives then, all of them that means, we will be at the function because that's a nice function, e to the t. We can recreate that function from knowing its height, its slope, its bending and all the rest of the terms.

That's called the Taylor series named after Taylor. Kind of frightening at first. It's frightening because it's got infinitely many terms. And the terms are getting a little more comp-- For most functions, you really don't want to compute the nth derivative.

For e to the t, I don't mind computing the nth derivative because it's still e to the t, but usually that's-- this isn't so practical. -- very practical. Tangent parabola, quite practical. Higher order terms, less-- much less practical.

But the formula is beautiful because you see the pattern, that's really what mathematics is about patterns, and here you're seeing the pattern in the higher, higher terms. They all fit that pattern and when you add up all the terms, if you have a nice function, then the approximation becomes perfect and you would have equality.

So to end this lecture, approximate to equal provided we have a nice function. And those are the best functions of mathematics and exponential is of course one of them. OK that's calculus. Well, part of calculus. Thank you. 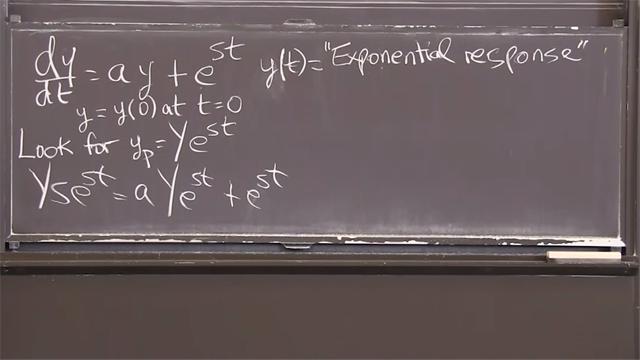