Separable equations can be solved by two separate integrations, one in t and the other in y. The simplest is dy/dt = y, when dy/y equals dt. Then ln(y) = t + C.

The t and the y have separated on the right hand side. And for example, dy/dt equal y plus t would not be separable. They'd be very simple but not separable. Separable means that we can keep those two separately and do an integral of f and an integral of g and we're in business.

OK. Examples. Suppose that f of y is 1. Then we have this simplest differential equation of all, dy/dt is some function of t. That's what calculus is for. y is the integral of g.

And moving the dt there, I'm just integrating dt. So the right hand side would just be t. And the left hand side is an integral we have to do. That's the minimum amount of work to solve a differential equation.

But the point is, with y and t separate, we just have integration to do. And here is the case when there is both a g of t and an f of y. Then let me just emphasize what's happening here.

Those are the two integrations to be done. And you will get examples of seperable equations. And what you have to do is two integrals.

And then there's this one little catch at the end. This is some function of y when I integrate. But I usually like to have the solution to a differential equation just y equal something.

So let me take, what about the equation dy/dt equals t over y. Clearly separable. The function's f. g of t is just t. f of y is just y. I combine those to y dy equalling t dt.

You see I've picked a pretty straightforward example. Now I'm integrating both sides from y of 0 to y of t on the left. And from 0 to t on the right.

That differential equation is solved. But I haven't found it in the form y of t equal something. But I can do that. I just move this to the other side. So that will go to the other side with a plus.

That's the solution to the differential equation. Maybe I make a small comment on this equation. Because it's essential to begin to look for dangerous points. Singular points where things are not quite right.

So y of 0 equals 0 allows the solution y equals t. And that is a solution. That if y is equal to t then dy/dt is 1. And on the right hand side t over y is t over t is 1. So the equation is solved. But my point was, there's got to be something going a little strange when y of 0 is 0. And what happens strangely is there are other solutions.

I like, I think, y equal negative t. And more, probably. But if y is equal to negative t, then its derivative is minus 1. And on the right hand side, I have t over negative t minus 1 again. So the equation is solved. That's a perfectly good solution. That's a second solution. It's an equation with more than one solution. And we'll have to think, when can we guarantee there is just one solution, which is of course what we want.

OK. I'd better do another example going beyond this. And maybe the logistic equation is a good one. So that's separable. And it's going to be a little harder. So let me do that one.

That's separable because the g of t part is 1. And what's the f of y? Remember f of y-- I want to put that on the y side. But it's going to show up in the denominator. So I have dy over y minus y squared equaling dt. And I have to integrate both sides to get the solution y.

So let me just make a little comment about integrating, because examples often have this problem. Integrating when there is a polynomial a quadratic in the denominator. There are different ways to do it. And the time that we'll really see this type of problem is when we discuss Laplace transforms.

So, integrating this, I can separately integrate a over y dy and b dy over 1 minus y. And those are easy. So partial fractions, after you go to the effort of finding the fractions, then you have separate integrations that you can do. That integral is just a times the log of y. And this is maybe b times-- maybe it's minus b times the log of 1 minus y.

So we've integrated. Just remember though. That with this particular equation, the logistic equation, we didn't have to use partial fractions. We could have done-- we've just seen how, thinking of it as a separable equation.

But that logistic equation had the very neat approach. Much quicker, much nicer. We just introduced z equal 1 over y. We looked at the unknown 1 over y, called it z, found the equation for z, and it was linear.

And we can write down its solution. So when we can do that it wins. But if we don't see how to do that, partial fractions is the systematic way. One fraction, another fraction. Integrate those fractions. Put the answer together. And then, and then, at the end, this is some integral depending on y equal to t.

OK. That's a more serious example. This example was a very simple one. You can do other examples of separable equations. y and t integrated separately. Good. Thank you. 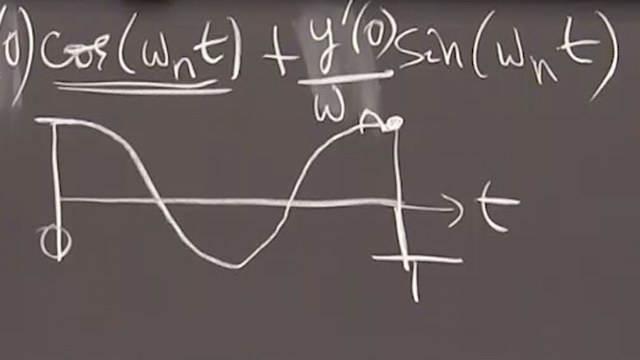