The impulse response g is the solution when the force is an impulse (a delta function). This also solves a null equation (no force) with a nonzero initial condition.

OK. So this is a video in which we go for second-order equations, constant coefficients. We look for the impulse response, the key function in this whole business, and the step response, too.

So those are the responses. So I'm going to call g-- that will be the impulse response, where the right-hand side is a delta function, an impulse, a sudden force at the moment t equals 0. So that's the equation. That's the impulse. And g is the response, and we want a formula for it.

Then the other possibility, very interesting possibility, is when the right-hand side is a step function. And then we want the response to that function. I click a switch. The machine starts working, and it approaches a steady response. The solution rises from 0.

So it starts at r of 0 equals r prime of 0 equals 0. The step response starts from rest. The action happens when I click a switch at t equals 0, and then r of t will rise to a constant. Very, very important solutions. But we'll focus especially on this one.

OK. So that's our equation with the right-hand side delta. And of course, that right-hand side is not totally familiar, not as nice as e to the st. But there is something that-- there is another way to approach it-- that's a key idea here-- that gives us this all-important function from solving a null equation. How's that?

I start with a null equation, but now this had no initial condition. So this one started from g of 0 and g prime of 0 both 0. And everything happened, boom, from the delta function. This is the same function. Except when I look to see what happens at t equals 0, what happens is g prime immediately jumps to 1.

So another way I can approach g, the computation of g, is to think of it-- I'm just looking for a null solution. I'm looking for the null solution that starts from 0. But it starts with an initial derivative, slope equal 1. So I know that g is a combination. So I know how to solve equations like that, null equation. You remember s1 and s2? I look at s squared-- I've made this coefficient 1-- so s squared plus Bs plus C equals 0. That gives us s1 and s2.

So that's the function in mathematics that's sometimes called the fundamental solution. It's a solution from which you can create all solutions. It's really the mother of solutions to this second-order differential equation. Because if I have another forcing function, this tells me that growth rate.

OK. We need to get more insight on that for particular cases. So let me show you the same function when I have no damping. Start with that case, always the easiest case. When B is 0-- B was the damping coefficient, the first derivative in our differential equation. Can I just bring down the differential equation?

When B is 0 here, that's no damping. I just have the second derivative and the function. That's when things oscillate forever. So that's what will happen. With B equals 0, I have pure oscillation. The s1 and s2 are cosines and sines that oscillate. Or it's neater to stay with exponentials, the i omega and minus i omega, where that's omega n, the natural frequency.

OK. The next case is underdamping. It's good to see all these cases each time. So that's a small value of B. Underdamping means there is some damping, but it's small enough so there's now a real part, but there's still an imaginary part.

So this is, in a way, the trick is the case when s is complex. If I go higher with the dampening, increase B further, then I'll hit a point where there are two real solutions equal. And if I push B beyond that, I've got overdamping, and those two real solutions separate. They're different, but they're real. And then my formula, in that case, overdamping, that would be the best formula.

But with underdamping, I can see the oscillation. If I just plug in those two solutions for s1 and s2, you'll see that I have the e to the minus B over 2t appears throughout. But then I have the sine of omega over omega, same as I had before, except now the damping frequency is a bit slower than the natural frequency. Damping slows that frequency down. And in a different video, we had a formula for omega damping, omega damping.

And then increase the damping some more, then this part-- this omega damping goes to 0. We don't see any imaginary part in the solution. We see two equal real values. They're simple. They have to be just minus B/2.

So that's a case of two s's coming together. And when two things come together, we're used to seeing a factor t appear. So I have that they came together at minus B/2. So I have the exponential of that. But I have a factor t from the merge of the two. And then if B increases beyond that, that's my formula. The two s's are real.

I don't think one memorizes all this. I had to look them up and write them on the board before starting this video. But I hope you see that they're extremely nice. The no-damping case with [? pure ?] frequencies and the underdamping case with a real-- a decay. The critical damping when you increase B further, you just have that and no oscillation. And then beyond that is overdamping. OK. So we're good for the impulse response.

And now I just have to say, what's the step response? So can I end this video by going back to my equation? I have to bring the board down to show it to you. So now I'm going to deal with the step response. So the equation is the same. I'm calling the solution r for response. And the point is, the right-hand side is now a step instead of a delta.

So we'd like to solve that equation starting from rest. So a switch went on, and I want a formula for r of t. That's all that remains. And actually, that's just-- well, you can see what the particular solution is. We look at a particular solution. Well, this right-hand side is 1. This right-hand side is 1 beyond t equals 0. So I'm looking for a way to get 1 out of that. Well, or it can be just a constant.

The particular solution is the steady state that we're approaching. And there's one little cool thing to do. Sometimes people who have the dimensions and units of things clearly in their mind will put a C in there. This is really the good thing to do is to have that C in there because now the units for r are the same as-- r is going to go to the 1.

The steady state will be 1 now because I have Cr equals C times 1. And out in infinity, the simple solution is r equal 1. If when r is 1, its derivative is 0. Second derivative's 0. r equal 1 is a solution. It's a particular solution. It's the steady-state solution. Good.

But that r of t equal 1 does not start correctly. We want to start at 0, with a slope of 0. So I have to subtract off one of these particular solutions with e to the s1. And now I have to get it so that I have to subtract it off so that this thing starts from 0.

So let me just make another comment on this r of t step response. My other comment is I've emphasized g of t, the impulse response is like responsible for everything. It's always with us. And how are those connected? That's my final question in this video. How is r of t connected to g of t?

So that is the two key solutions, you could say. The impulse response important in theory and in practice. The step response extremely important in practice because turning on a switch is so basic an operation in engineering. Good. Thank you. 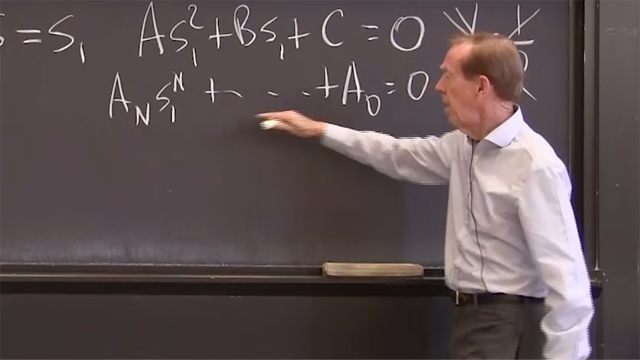