Differential Equations and Linear Algebra, 5.1: The Column Space of a Matrix, A

An m by n matrix A has n columns each in Rm. Capturing all combinations Av of these columns gives the column space – a subspace of Rm.

OK. We're coming to the point where we need matrices. That's the point when we have several equations, several differential equations instead of just one. And it's a matrix that does that coupling.

So can I-- this won't be a full course in linear algebra. That would be available, you may know on, open courseware for 18.06. That's the linear algebra course. But -- facts, and why not just say them here in a few minutes?

So I have a matrix. Well there's a matrix. That's a 3 by 3 matrix. And first I want to ask how does it multiply a vector. So there it is multiplying a vector, v1, v2, v3. And what's the result, key idea? It takes the answer on the right-hand side is this number v1, times that column, plus this number, that number times the second column, plus the third number, the third number times the third column, combination of the columns of a. That's what a times v is. That's what the notation of matrix multiplication produces.

That's really basic to see it as a combination of columns. Now I want to build on that. That's one particular, if you give me v1, v2, and v3, I know how to multiply it. I take the combination.

Now I would like you to think about the result from all v1, v2, and v3. If I take all those numbers, and I get a whole lot of answers. They're all vectors, the result of A times v is another vector, Av, And I want to think about Av, those outputs, for all inputs v.

So I take v1, v2, v3 to be -- numbers. And I get all combinations of those three columns. And usually I would get the whole 3-dimensional space. Usually I can produce any vector, any output b1, b2, b3 from A times v. But not for this matrix, not for this matrix. Because this matrix is, you could say, deficient.

So if you gave me a different matrix, if you change this 3 to an 11, probably the column space now changes to-- for that matrix I think the column space would be the whole 3-dimensional space. I get everything. But when this third column is this the sum of the first two columns, it's not giving me anything new. And the column space is only a plane.

So it's a question about b. What is it about b that must be true if this can be solved? Well this says that equation is saying b is a combination of the columns of a. So this has a solution when b must be-- shall I say must be in the column space. For that example, only b's that where we can get a solution on b's that are combinations of the first two columns. Because having the third column at our disposal gives us no help. It doesn't give us anything new.

The big question is, is there another solution. And here for this deficient, singular, non-invertible matrix, there is. There is another solution. Let me just write it down. Let me put it in there. Do you see what the solution is? The third column is the sum of those two. So if I want one of that column, I should take minus 1 in other column.

I was looking at which b --. I wasn't paying attention to what that solution was, just is there a solution. Then that b is in the column space. I take b equals 0. I fixed that all important b. And now I'm looking at the solutions. And here I find one. Can you find any more solutions? I think minus 10, minus 10, and 10 would be another solution. It's 10 times as much.

And 0, 0, 0 is solution. -- line of solutions. We had a plane for the column space. But we have a line for the null space. Isn't that neat? One's a plane, one's a line, dimension two plus dimension one. Two for the plane, one for the line, adds to dimension three, the dimension of the whole space. OK. That's a little going at in. All right.

It's a combination of the columns. You saw me create it from the first two columns. So now I ask, what are all the solutions? It's in the column space. It's 2 times the first column, plus the second column. But there may be other solutions. So all solutions, a complete solution, v complete is here's the key idea. And the point is that it's the same that we know from differential equations.

So v particular could be 2, 1, 0. It works for that particular b, two of the first column, one of the second. Now then we could add in anything in the null solution. So we have infinitely many solutions here. We've got one solution plus added to that, a whole line of solutions. This, all the null space, would be all vectors like that.

OK. That's the picture that we've seen for differential equations. And I just want to bring it out again for matrix equations, using the language of linear algebra. That's what I'm introducing here. I have one particular solution, plus anything in the null -- space of vectors that is the heart of linear algebra. Thank you. 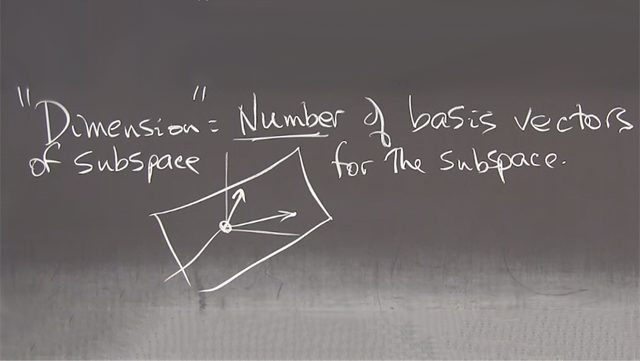