A graph has n nodes connected by m edges (other edges can be missing). This is a useful model for the Internet, the brain, pipeline systems, and much more.

OK. This video is a different direction. It will be about linear equations and not differential equations. A matrix is at the center of this video and it's called the incidence matrix. And that incidence matrix tells me everything about a graph.

Now, what do I mean by the word graph? I don't mean a graph of sine x or cosine x. The word graph is used in another way completely for some edges and some nodes. So I have some nodes. In this case 1, 2, 3, 4 nodes. That's my number n.

The number m is the number of edges that connect the nodes. So I have edge 1 connecting those nodes, edge 2, edge 3, 4, and 5. And I didn't put in an edge 6. A complete graph would have all possible edges, but a general graph can have some edges. Some pairs of nodes are connected others are not connected.

So now I want to create the matrix that shows me everything that's in that picture. Then I can work with the matrix and graphs. And their matrices are the number one application, number one model for so many applications, like the world wide web. The web might have-- every website would be a node and there would be an edge between two nodes if those websites are linked. So the world wide web is a giant graph.

Or the telephone company has a giant graph in which the nodes are the telephones, and there is an edge when a call is made from one phone to another, between two phones. So, nodes and edges. And our brain-- which is the great problem of the 21st century is to understand the graph that represents our brain, the connections of neurons in our thinking-- well, that's a tougher problem than we'll solve today.

Do you see there the graph? Everything, all the information in this picture is now captured in that matrix. So we can work with the matrix. And what does a matrix do? It multiplies vectors. That's what a matrix does, it acts on vectors.

So what happens if I multiply that matrix by a vector? So now let me take out these edge numbers and do a multiplication. That matrix has four columns, it's a 5 by 4 matrix, m by n. 5 by 4. So it multiplies a vector with four components and those four components will come from the four nodes.

And maybe they represent voltages at the nodes. Let me think like an electrical engineer for a moment. So if there's my matrix, I imagine I have voltages, v1, v2, v3, v4, at the nodes. So there's a v1 voltage here, v2, a v3, and a v4, and where those voltages' currents will flow. So my unknowns are the voltages, the four voltages, and the five currents. That's what the engineer needs to know.

So first of all, when I multiply A times v, what do I get? Let me just do that multiplication. So that first row times that gives me v2 minus v1, right? The dot product of the row with the vector. The next one is v3 minus v1. Then I have a minus 1 there. It's a v3 minus a v2. Then I have a minus 1 and a 1. I think that's v4 minus v1. And finally, this dot product of that will give me a v4 minus v2.

And now, how much flow? So now I'm looking for the flows. So can I call those w, for the flows. So I have a w2 is the flow on that edge. A w1 is a flow there. A w5, a w3, and a w4. My pair of unknowns-- and that's the beauty of this picture-- is the voltages v1 to v4 four at the nodes, and the currents, the flows, w1 to w5 on the five edges. And I've seen that Av gives me the voltage differences.

I'm going to briefly, briefly approach the fundamental laws of flow, of current flow, of flow in any network. We're talking about the most basic equation, I would almost say, of applied mathematics. Maybe I should say of discrete applied mathematics. By discrete I mean a graph without derivatives. I'm not seeing derivatives here, I'm just seeing matrices and vectors.

So I have to remember that incidence matrix, A-- let me write it down again. Av gave the voltage differences. And that's one part of my picture. Another part is what is the equation that finally brings it together? That if I have the currents-- so the v's were the voltages. Now, there's going to be an equation involving w, the currents.

So if current is traveling around my graph, my network, and it's a stable equilibrium here so that flow into node 1 equals flow out of node 1. And let me tell you what that equation is in terms of the matrix A.

So between A and A transpose, the incidence matrix is leading me to the fundamental equilibrium condition for flow in a network. Now, one more law is needed. It has to connect voltage differences to flows, potentials to currents.

Do you know who created that law in electrical engineering? It was Ohm. So Ohm's Law, finally, Ohm's Law is edge by edge that the potential difference, the drop in potential, the potential forcing current is proportional to the current.

So voltage difference-- let me write it in words. Voltage difference-- voltage drop I could say-- between the ends or across a resistor is proportional to, and there is some resistance, some physical number comes in here. This is where the material we're working with comes in.

In Kirchhoff's Laws, those laws hold for a network before we even say what the network is made of. But now if our network is made of resistors or pipes or whatever we have, then this will be some conductance. So E equal IR, some resistance, times the flow, times the current flow, w.

So a difference in v's is some number, this is the physical constant that we have to measure in a lab to know how many ohms our resistor is. That equation is on each edge. So we have a bunch of equations and together they tell us the four voltages and the five currents.

And you won't be surprised that when the whole thing is put together and we have a final equation to solve, we end up with A transpose and A. And that magic combination, A transpose A, is central to graph theory. It's called the graph Laplacian and has a name and a fame of its own. Thank you. 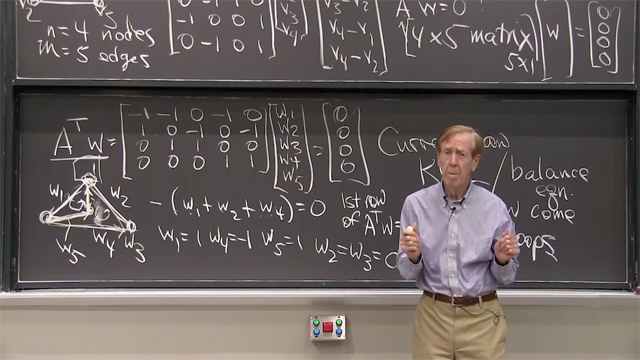