Our application was the second-order equation with a symmetric matrix, S. And we solved this equation. Second derivative, plus S times y, equals 0.

And you maybe remember how we solved it. We looked for an exponential solution. e to the I omega t, times a vector x. We substituted, and we discovered x had to be an eigenvector of S, as usual. And lambda, which was omega squared, is the eigenvalue.

But I didn't stop to point out that if we want lambda to be omega squared, we need to know lambda greater or equal to 0. So that is the best of the best matrices. Symmetric and positive definite, or positive semidefinite, which means the eigenvalues are not only real, they're real for symmetric matrices. They're also positive. Positive definite matrices-- automatically symmetric, I'm only talking about symmetric matrices-- and positive eigenvalues.

And you see that number lambda is, in this equation, I have a number that can't be negative. A number that's positive, for sure. Because x is not the 0 vector. So lambda is never negative.

So if I want to move from semidefinite to definite, then I must rule out A x equals 0 there. Because that's certainly a possibility. If I took the 0 matrix, all 0's, as A, A transpose A would be the 0 matrix. That would be symmetric. All its eigenvalues would be 0.

Would it be positive semidefinite? Yes. Yes. All its eigenvalues would actually be 0. Of course, that's not a case that we are really thinking about. More often we're in this good case where all the eigenvalues are above 0.

OK. So that's the meaning. And now the next job. How do we recognize a positive definite matrix? It has to be symmetric. That's easy to see.

But how can we tell if its eigenvalues are positive? That's not fun because computing eigenvalues is a big job. For a large matrix, we take time on that. We didn't know how to do it a little while ago. Now there are good ways to do it, but it's not for paper and pencil, and not for I.

So how can we tell that all the eigenvalues are positive? Well, we only want to know their sign. We don't have to know what they are. We don't know that we need the number, we just want to know is it a positive number.

And there are several neat tests. Can I show you them? I'm going to have five tests. Five equivalent tests. Any one of these tests is sufficient to make the matrix S positive definite.

There is a particular S there that I'll use as a test matrix. So there is a symmetric matrix S. And I know it is positive definite. But how do I know?

What do I mean by an upper left determinant? I look at my matrix. That's a 1 by 1 determinant. Certainly positive. That determinant is 4.

Here is a 2 by 2 determinant. And that determinant is 40 minus 36, so happened to be 4 again. So the determinant of the matrix is 4.

But I also needed the ones on the way. I can't just find the determinant of the whole matrix. That's the last part of this test, but I have to do all the others as I get there.

So it passes that test. Check. It works. So that test is passed. I'm doing more work than I need to do because one test would have done the job.

Oh, what did we convince ourselves? We said that this was sure to be semidefinite. And I needed some condition to avoid A x equals 0. There was the possibility of A x equals 0.

I'll just bring that down. You remember we started there and ended up here. And if A x was 0 then lambda was 0. We were in the semidefinite case. So I have to avoid that.

I want to go on to test 5. Which really, in a way, is the definition, the best definition, of positive definite. So if I took number 5, it's the energy definition. So can I tell you what that means?

I mean that x transpose Sx. If I take my matrix S that I'm testing for positive definite, I multiply on the right by any vector x, any x, and on the left by x transpose. Well, I get a number. S is a matrix. Sx is a vector. Inner product with a vector. I get a number. And that number should be positive for all x.

Oh, I have to make one exception. If x is the 0 vector, then of course that answer is 0. All x except the 0 vector.

OK. So that would be a way to-- another test. And this is associated in applications with energy. So I call this the energy test, or really the energy definition, of positive definite. x transpose Sx.

I'd like to apply that test. So you'll see what does it mean. Now we're looking at all x to this particular example.

But I won't throw away this board here. You see eigenvalues, pivots, determinants, A transpose A, and energy. Really all the pieces of linear algebra.

A transpose A. We'll see it more and more. It comes up in least squares.

If I have a general matrix A, it's not even square. It doesn't have great properties. But when I compute A transpose A, then I get a symmetric matrix. And now I know also a positive semidefinite. And with a little bit more positive definite matrix. OK.

Let me take my matrix S. That small, example matrix. And apply the energy test. OK. So I'm looking at energy.

Now, can I compute that? Yes. It's a matrix multiplication. Nothing magical here. But when I do, I'll show you the shortcut.

Well, I tested two vectors. I tested the 1, 1 vector and the 1, minus 1 vector. But you have to know that for every vector x, this does turn out to be positive. And I can show you that by something called completing the square. It's not what I plan to do.

OK. So that's the fifth, number 5, test. But I think of it really as the definition. And it means-- can I draw a picture?

OK. That's for another day.

I just would like to tell you one more thing about positive definite matrices. I got a book in the mail which could be quite valuable. It's a little paperback, and the title is Frequently Asked Questions in Interviews for Financial Math.

Being a Quant. Going to Wall Street. Becoming rich. So they don't give you all the money right away. They make you show that you know something.

OK. Can you see that matrix? 1 is on the diagonal. Those are correlation. This is a correlation matrix. That's why it's important in finance.

So the question when you go to Wall Street to apply for the money. If you're asked what's the test on those numbers a, b, c, to have a positive definite, proper correlation matrix? I would suggest the determinant test.

And what's the 3 by 3 determinant? 1 from the diagonal. And I have an acb and an acb. I think I have two acb's from the three terms.

Now, those terms have the plus signs. And now I have some with a minus sign, which better not be too big. That's the whole point on positive definite matrices. The off diagonal is not allowed to overrun the diagonal. The diagonal should be the biggest numbers.

That first test there. Second test there. Well, the easy test was just 1, is positive. So really, that's what they're looking for. That would be the test, those numbers. So abc can't be too large or that would begin to fail. Good.

So positive definite matrices have lots of applications. Here was minimum. Here was correlation matrices and finance. Many, many other places.

Let me just bring down the five tests. Eigenvalues, pivots, determinants, A transpose A, and energy. And I'll stop there. Thank you. 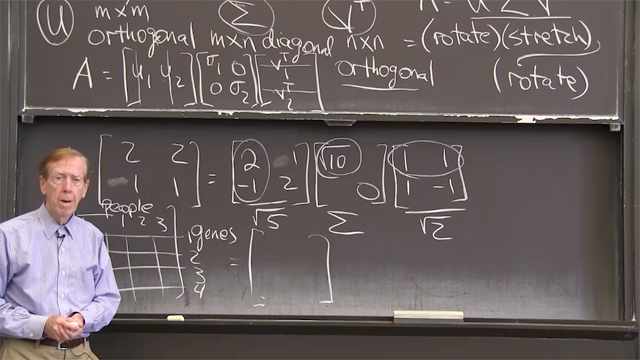