The partial differential equation ∂2u/∂x2 + ∂2u/∂y2 = 0 describes temperature distribution inside a circle or a square or any plane region.

Today I'm speaking about the first of the three great partial differential equations. So this one is called Laplace's equation, named after Laplace. And you see partial derivatives. So we have-- I don't have time. This equation is in steady state. I have x and y, I'm in the xy plane. And I have second derivatives in x and then y. So I'm looking for solutions to that equation.

And wonderfully, wonderfully, it works for all powers, exponents n. So I have now sort of a pretty big family of solutions. A list, a double list, really, the real parts and the imaginary parts for every n. So I can use those to find the solution u, which I'm looking for, the temperature inside the circle.

So let me take an example. Let me take an example. We're taking the region to be a circle. So in that circle, I'm looking for the solution u of x and y. And actually in a circle, it's pretty natural to use polar coordinates. Instead of x and y inside a circle that's inconvenient in the xy plane, its equation involves x equals square root of 1 minus y squared or something, I'll switch to polar coordinates r and theta.

Well, you might say you remember we had these nice family of solutions. Is it still good in polar coordinates? Well the fact is, it's even better. So the solution of u will be the real part and the imaginary part. Now what is x plus iy in r and theta? Well, we all know x is r Cos theta plus ir sine theta. And that's r times Cos theta plus i sine theta, the one unforgettable complex Euler's formula, e to the I theta.

Instead of two constants that we had for an ordinary differential equation, a C1 and a C2, here I have these guys go from up to infinity. N goes up to infinity. So I have many solutions. And any combination working, so that's the general solution. That's the general solution. And I would have to match that-- now here's the final step and not simple, not always simple-- I have to match this to the boundary conditions. That's what will tell me the constants, of course. As usual, c1 and c2 came from the matching the conditions.

Now I don't have just c1 and c2, I have this infinite family of a's, infinite family of b's. And I have a lot more to match because on the boundary, here I have to match u0, which is given. So I might be given, suppose I was given u0 equal to the temperature was equal 1 on the top half. And on the bottom half, say the temperature is minus 1. That's a typical problem.

I have a circular region. The top half is held at one temperature, the lower half is held at a different temperature. I reach equilibrium. Everybody knows that along that line, probably the temperature would be 0 by symmetry. But once the temperature there halfway up, not so easy, or anywhere in there. Well, the answer is u in the middle, u of r and theta inside is given by that formula. And again, the ANs and the BNs come by matching the-- getting the right answer on the boundary. 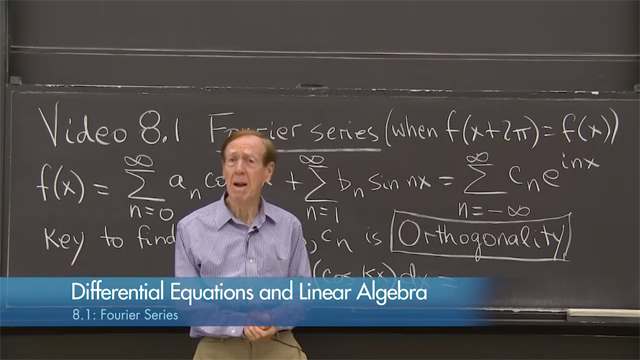