“Simulink and Embedded Coder enabled us to open the door to new markets. With increased productivity from extensive simulation and efficient code generation, we have confidence in our ability to produce the systems that larger customers are asking for in the time frames they want.” 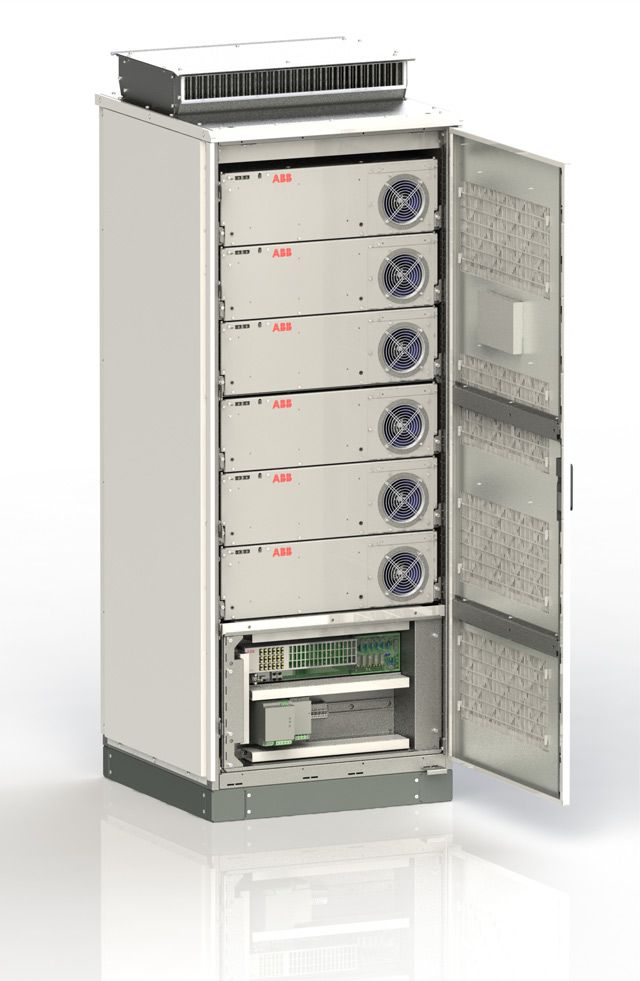 “With Model-Based Design, our developer productivity is easily increased tenfold,” says Dr. Robert Turner, senior R&D engineer at ABB in New Zealand. “Simulation and code generation enable us to turn changes around quickly and eliminate human errors in coding. Our algorithms typically work the first time, so we no longer waste a big part of our development cycle debugging code.”

With a single system comprising up to 32 linked PEBBs, the controller must precisely manage power balancing and sharing. When a fault is detected, control algorithms must immediately take steps to avoid a cascading series of faults and maintain power delivery via the remaining blocks.

Testing and debugging these control algorithms on actual hardware can be both expensive and dangerous. A single PEBB costs thousands of dollars and is capable of delivering 250 kilowatts—more than enough power to cause serious damage if not managed safely. ABB engineers needed a way to verify their control algorithms via modeling and simulation before hardware testing.

In the past, ABB software engineers coded control algorithms manually based on specifications written by control engineers. The steps in this process—writing the specification, hand-coding the algorithms, and debugging the handwritten code—were both tedious and error-prone. ABB wanted to automate and accelerate development by generating production code directly from system models.

Working in Simulink and Stateflow®, the team modeled the PEBB control algorithm and state machine, which defines reset, startup, running, and fault states and the transitions between them.

They created test harnesses in Simulink, which they used to verify their model. They conducted further verifications by running closed-loop simulations in Simulink with a plant model that included inductors, capacitors, and other power electronics components in the PEBB.

After successful hardware tests, ABB engineers created a PEBB Simulink block and included it in a library of functional components that had the same interfaces as their hardware counterparts.

To develop a new inverter product for an ABB customer, the engineers create a Simulink model containing PEBB building blocks. They add two state machines created in Stateflow, one that manages the PEBBs and a second that implements control logic for the customer’s application.

The team verifies the application-level design by running simulations with multiple PEBBs operating under various grid and load conditions. They then generate C code from the model with Embedded Coder before running final hardware tests.

ABB engineers have expanded their use of Model-Based Design beyond control systems, and are now using MATLAB and Simulink to model and simulate custom communication protocols and thermal effects.