"We don't have time to investigate our algorithms with C or C++. Fortunately, MATLAB lets us test our ideas with just a few lines of code. It saves a lot of time, and moves us toward our goal of creating a commercially viable onsite energy system." 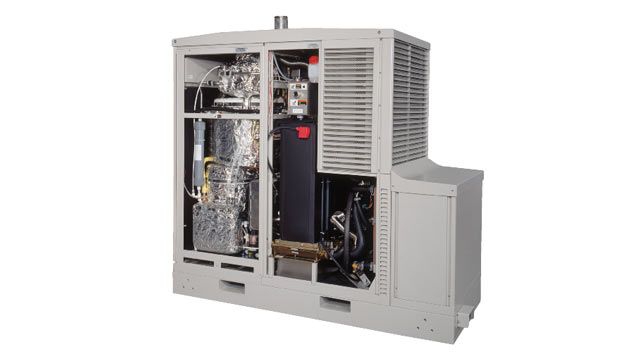 To meet their objective of putting future power generation to work, Plug Power Inc. designs and develops onsite energy systems based on fuel cells. They use MathWorks tools to enhance product performance, reduce costs, and improve manufacturing and integration processes.

"These systems need to be reliable and efficient," explains Rebecca Dinan, controls engineer for Plug Power. "We accomplish this by using MathWorks tools to rapidly develop and simulate our control algorithms before trying them on a system."

To create a reliable and cost-effective product while shortening time to market, Plug Power must accurately model fuel cell systems and rapidly test new or improved algorithms before implementing them on hardware.

For optimal performance, the power generation module (including the fuel cells) and reformate processing module are run within strict temperature ranges, creating further control design challenges. As Dinan explains, "A change in electric power demand creates a huge disturbance on the system. We need to automate the control of the entire system."

These automated control algorithms must provide the same level of performance with less input, enabling the company to lower costs by reducing the number of sensors in the control system.

Plug Power uses MATLAB and Simulink to develop and test algorithms, simulate components and systems, and streamline the development process from idea to implementation.

In a recent project, Dinan developed a control algorithm to maintain a consistent catalyst temperature by manipulating an air blower. She first moved the blower manually in the lab to determine how the blower affects temperature in the real world.

inan then used MATLAB to analyze the data and perform system identification. "I fed the data in and used MATLAB to determine all open-loop transfer function parameters, such as gain, time delay, and the time constant," explains Dinan.

Using these parameters, she quickly developed a model incorporating a proportional integral derivative (PID) controller in Simulink. "The PID controller is given a setpoint and uses the air blower to regulate the temperature to setpoint—somewhat like cruise control in your car," Dinan explains. "I used a PID block in Simulink to accomplish this. It’s simple and right there for me to use."

When the dynamics of the system require a more complex strategy, Dinan tunes a model predictive controller with Control System Toolbox and Deep Learning Toolbox.

Deep Learning Toolbox enabled Dinan to also create a model that predicts the power demand placed on the fuel cell system. The model is based on a large volume of historical electric load data.

Using a single line of MATLAB code, Dinan then created three-dimensional plots to analyze various aspects of the system, such as the signal-to-noise ratio.

After making adjustments to the controls, Dinan forwarded the pretested algorithms to the embedded software engineers for easy implementation.

A GUI developed with MATLAB will enable Plug Power to further accelerate control system development by simulating the effects of blower positioning.

Another group at Plug Power is accelerating control design by using Simulink to create a complete model of a next-generation fuel cell system. They are currently validating their Simulink system models with the physical system.