Computational Thinking with MATLAB and Simulink

Integrating quantitative programming into your curriculum

Computational thinking is a process for formulating problems and their solutions. Although its roots are in computer science, many additional disciplines have adopted computational thinking as a required, foundational approach to educating students at the undergraduate and even K–12 levels.

Computational thinking is a fundamental skill for everyone, not just for computer scientists.

Computational thinking involves applying traditional computer programming techniques when solving mathematical, scientific, and engineering problems by expressing them in a programming language or other runnable application software. The thinker’s ideas are expressed and captured in a reusable and maintainable form, and the computer can produce the solutions. For example, computational thinking is at work when geoscientists develop mathematical models to predict the effect of climate change or seismic activity. Similarly, neuroscientists use algorithms that analyze signal data generated from brainwaves and muscle movements to plan the optimal prostheses. In both cases, they’re using computational models to express science and engineering concepts.

In recent years, educators in multiple science and math disciplines—such as geoscience, biology, and physics—have undertaken major efforts, funded by organizations such as NSF, NIH, the EU, and other science-focused groups, to transform their courses, curricula, and even whole departments to incorporate applied computation. Their common goal is to incorporate computational thinking best practices and software tools into teaching, thinking, learning and, ultimately, places of work, such as weather research stations, financial investment firms, and companies focused on automated driving and advanced decision-support technologies.

MATLAB® and Simulink® support and enable these computational thinking tasks, as well as related applications, such as computational finance and biology; data analysis, including machine learning and deep learning; and signal processing and image processing.

Software Tools for Teaching and Learning 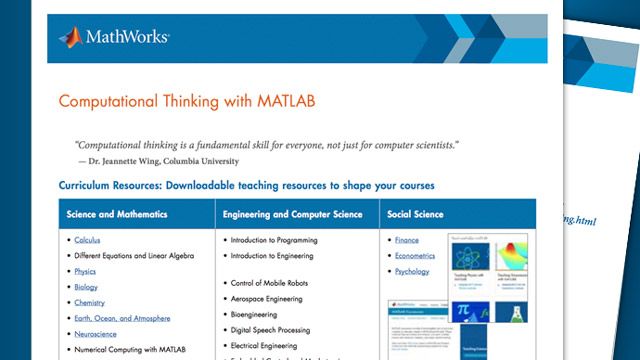 Integrating Computational Thinking into Your Curriculum